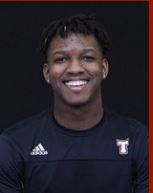 After being named Rookie of the Week twice during his first collegiate season as a member of the Thomas College Terriers, young Bermudian tennis player Yontz Sutton has been awarded the Rookie of the Year honors by the  North Atlantic Conference (NAC).