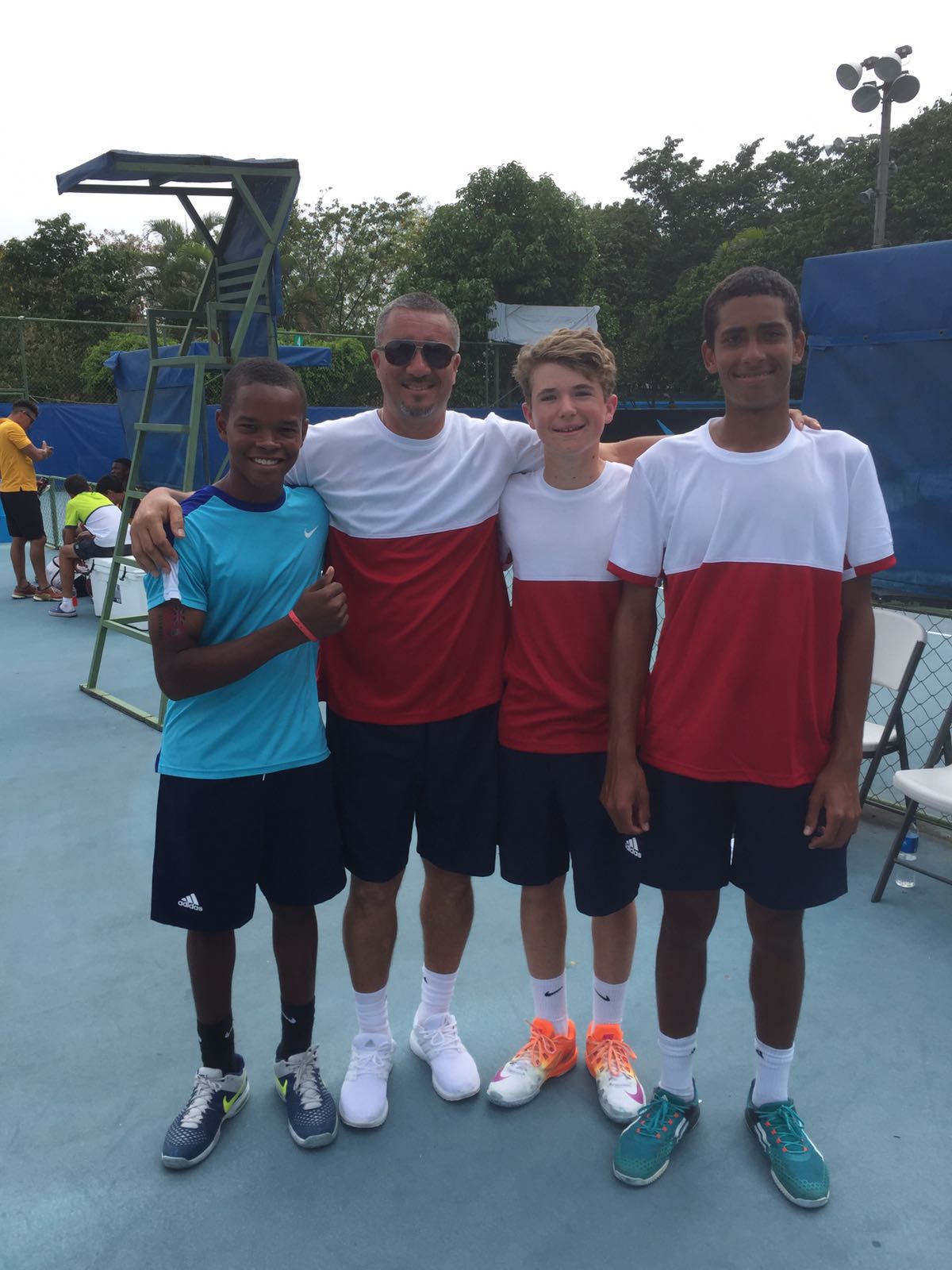 The team arrived at 8am for their allotted 30 minute warm up session with match playing starting at 8:30am.  First up in the order was Tariq Simons playing in the no. 2 position for the team.  Simons is a newcomer to team tennis, this is his first Davis Cup team event.  Simons faced John Azar from Jamaica, the opening games were a battle of nerves for Simons.  Unfortunately, Azar got the better of Simons, who made too many unforced errors ultimately losing the match 6-3, 6-4. Coach Mallory said ‘Simons can definitely hold his own, the first day is always hard and especially this event, I could tell that nerves got the better of him today.’

Trey Mallory was up next in the No. 1 position. Mallory played Demani Cain, a player he has never defeated in previous match play. In addition, Bermuda needed to win this singles to have a fighting chance at winning the fixture, adding to the intensity of the match for Mallory.  Mallory started strong and blew his opponent away in the first set 6-1, with some solid ground strokes. Second set Cain switched up his strategy, slowing down the pace of the game. Mallory was up 5-1 in the second set and had triple match point, but dropped that game to go 5-2. Cain then broke back and Mallory dropped another game to 5-3. Coach Mallory knew that now was the time to close out the match and Trey Mallory did just that, winning the match 6-2, 6-2 to tie up the fixture.

The fixture would now be decided on the doubles. Coach Mallory having assessed the players earlier in the day and throughout weekend practice sessions felt Scott Redmond was the best choice for doubles with Trey Mallory, the pair played Azar and Cain in the doubles. The opening set lasted only 15 minutes, and was a blow out at 6-0 to Redmond and Mallory.  It looked to be a quick match but Azar and Cain fought back and regained control of the second set winning the second set 6-4, it was all down to the super tiebreak.  Mallory and Redmond were up on the super tiebreak 7-0 and it looked like a victory was just in sight, however their opponents were not ready to give it up just yet, switching tactics to play a baseline style game. The pressure for Coach Mallory was unbearable as he watched the 7-0 lead slip point by point to 7-5. A few intense coaching moments and the team of Mallory and Redmond managed to win the super tiebreak 10-5, to ultimately win the match 6-0, 4-6, (10-5), taking Bermuda to victory against Jamaica (2-1).

Coach Mallory was thrilled with the first-day opener.  ‘I’m really proud of the players today, the team rallied and they worked hard for the win.  We cannot, however, sit back and think our work is done, Wednesday we play Puerto Rico, they will be tough having defeated Jamaica. We need to make sure we are ready.   We will let today’s victory sit for a little and then focus quickly on the strategy for tomorrow, for now I’m one proud Bermudian Coach (and of course proud Dad too).’

Wednesday’s match again Puerto Rico will be played on Center Court at 12noon in El Salvador.